Diagnosing Lipedema can be difficult as several other conditions present with similar symptoms, some of them in the same fat disorder family. Lipedema has frequently been misdiagnosed by clinicians as general obesity, which has had devastating effects, both physical and psychological, to people suffering with the disease.  It can also be confused with venous insufficiency, plain lymphedema and the combination condition lipo-lymphedema.

Unfortunately, at this time there is no ICD (International Classification for Disease) code for Lipedema in the USA. Several countries, such as Germany, do have Lipedema, differentiated by stage, in their current ICD 10 codes. It is projected that Lipedema will have its own code in the new ICD 11 codes (see the beta version here https://icd.who.int/dev11/l-m/en#/http://id.who.int/icd/entity/1172950828), which is slated for release in countries outside the USA sometime in mid 2018.  United States projections put the release and acceptance by somewhere in 2025!  This means we may not know the exact prevalence of Lipedema in the USA until we can actually code it in our healthcare medical systems.

Since Lipedema can be confused for a couple of other conditions I made a table comparing the top conditions and how they differ from Lipedema.

As shown in the above chart obesity is more common than Lipedema.  In fact people with Lipedema are often confused for and diagnosed with obesity, which complicates a subsequent treatment plan. Obesity is the accumulation of excess fat mainly stored in the abdomen or belly whereas Lipedema is an excess accumulation of fat stored disproportionately outside the abdomen.  While both conditions present differently in early stages both obesity and Lipedema may be present together from times of immobility related to the Lipedema.  So while the two can exist together, mobility issues with Lipedema can help foster additional obesity causing a vicious cycle of weight gain. The positive takeaway is that people with Lipedema can work to reduce the non-Lipedema fat creating a healthier situation in which to address the underlying Lipedema.

Venous insufficiency or Chronic Venous Insufficieny (CVI) is a common disease affecting between 20-40% of the adult population. CVI is a serious circulatory disorder that can become worse over time.  It is caused by damaged valves in the leg veins that do not close completely allowing blood to flow backward from the heart. This backward flow creates a diminished blood flow and swelling from excess fluid leaking into the surrounding tissues of the legs and feet.  This fluid becomes lymph resulting in a lymphedema condition called veno-lymphedema.  Skin discoloration, bruising and a secondary fat accumulation are common to both CVI and Lipedema, which along with swelling can make the two conditions similar in presentation.  A Doppler ultrasound, which measures the amount of blood flow through your arteries and veins, can help differentiate the two conditions.

You can read more about Lipedema and Lymphedema on our site.

Tests for Lipedema and Lymphedema

2-D Ultrasound: This fast and easy test uses an ultrasound probe to show fat below the skin.  Lipedema fat will be easier to see is it is more fibrous and swollen than normal fat.

Lymphoscintography: This test evaluates your body’s lymphatic system for disease using small amounts of radioactive materials called radiotracers that are injected into the skin. The radiotracer travels giving off gamma rays that are recorded by a special camera and computer to recreate an image of your inside body. Since this technology offers pinpoint molecular activity the lymphoscintigraphy can potentially identify lymphatic disease even in its earlier stages.

Indocyanine Green (ICG) Lymphography: This test uses a special green dye injected into the intracutaneous skin and photographed with a special system that captures images of the dye flow in the lymphatic system. The skin surface is then illuminated with an infrared light, and the light emitted by the ICG absorbed in lymph vessels is imaged using a CCD camera to detect lymph flow in subcutaneous lymph vessels.  In patients with Lymphedema a non-linear pattern will emerge showing areas where edema is starting.  They use splash, stardust or diffuse patterns to indicate areas of lymphedema. (2)

Venous Doppler Ultrasound: As explained above a venous Doppler ultrasound is a very useful test for for diagnosing CVI.  The Doppler Ultrasound can also help find a Deep Vein Thrombosis (DVT).  If a Lipedema patient has a suspected CVI this test will help define the condition of the venous blood backflow and how it may aggravate a Lipedema condition.

The following two videos are with Dr. Karen Herbst, a specialist in fat disorders at the University if Arizona in Tuscon.  She is evaluated a patient for the presence of one of the identified fat disorders, namingly Lipedema. The videos may be helpful as a preliminary assessment tool, talking points you can use in your conversation with your medical professional in getting a diagnosis.

To your improved health!

Not sure if you have Lipedema.  Take the Lipedema Project’s Lipedema quiz. 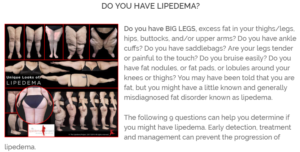